The work-energy theorem is a simple expression that relates the work done on a rigid body (W) to the change in kinetic energy of the body ():

Work is defined as the path integral of force. Writing out this path integral, we arrive at an expression that should be familiar to many students in physics.

In the expression above, and are the initial and final positions of the rigid body. Although this expression is widely used in classical mechanics, we often forget that the work-energy theorem can be used in special relativity as well. With a bit of simple calculus, it is easy to solve for the kinetic energy of a relativistic particle using the formula above.

Recall that this is a simplification of the impulse momentum theorem when mass is constant:

We will orient our axes so that the velocity and force are along the x-axis. Letting and yields:

Let’s plug this expression for force into the work-energy theorem and change our variable of integration to v. Since momentum and are both functions of speed, this substitution will simplify the analysis.

and time we can solve this integral by using integration by parts. Just to keep the notation clear, I will use a and b instead of u and v in my expressions. Let:

In the last two lines above, we use the fact that the velocity of the system is equal to at time and at time . We can solve the integral above using a simple u-substituion. Let . Then, .

Suppose that our particle starts from rest (or we want to use a speed of zero as a baseline). That means and . Thus, the final expression for the kinetic energy is: 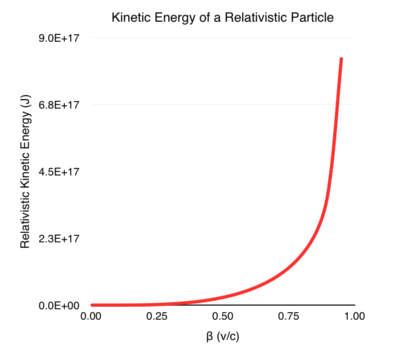 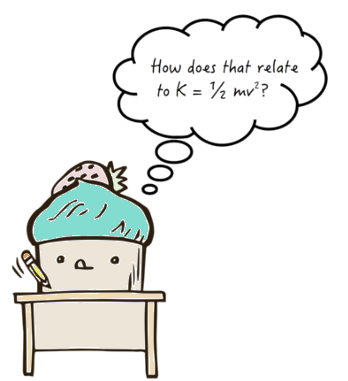 In a previous blog post I showed how one can expand the Lorentz factor, drop higher order terms, and retrieve the low-speed limit of relativistic expressions. Why don’t we do that here? Recall that the expansion for is given by:

Substitute that into our expression for kinetic energy. 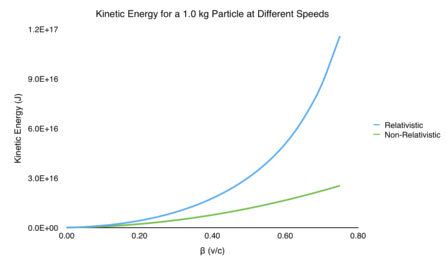 Whenever we break into a new area of physics, we need to remember that our previous knowledge is still valid. Here, we used a simple classical concept to derive the relativistic kinetic energy of a particle.