Optical Levitation of a Cylinder

Last week in our introductory electricity and magnetism class, we calculated the properties of a cylinder with mass \(m\) that levitates due to the balance between an upward radiation force and a downward gravitational force. This effect, called optical levitation, was studied in depth by Arthur Ashkin of Bell Laboratories. Our simple model of uniform, cylindrical laser beams and uniform, cylindrical masses left out a lot of the subtleties of Ashkin’s work. However, it did give us a sense of how powerful laser light could be. In this post I want to review that simple calculation of the mass that we did in class. 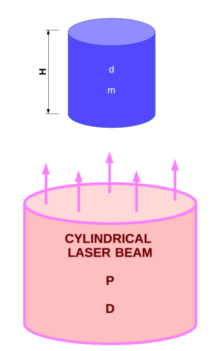 We know from mechanics that the gravitational force on a massive object is \(F_g = mg\).

We know that we can relate the radiation pressure to the intensity (\(I\)) of the laser beam; we have to be careful though. If the laser beam is completely absorbed by the face of the cylinder, the pressure is:

On the other hand, if the laser beam is completely reflected by the face of the cylinder, the pressure is:

Let us assume that the laser beam is perfectly reflected at the face of the cylinder in this case.

Finally, we can convert intensity to power. Remember, intensity is just power per unit area. In this case, we are using the area of the laser beam:

We know from this result that the mass of the cylinder must be very small due to the \(cg\) term in the denominator. Thus, optical levitation really only works for objects that have a mass of fractions of a gram.