Falling Rope on a Scale

I have recently been reading the Matter and Interactions textbook for my research. Chabay and Sherwood really try to develop a few basic physics relationships that can be used repeatedly rather than listing equations. It is interesting how introductory material, seen in a different way, can change the way that you solve problems.

Today, I want to go over a problem that I found challenging in intermediate mechanics because I was thinking in terms of specific equations rather than broad ideas. What is the weight of a falling rope measured on a scale? There are many variations of the falling rope problem involving falling sand in an hourglass, falling chains, and other falling liquids. No matter what the description, the core concepts remain the same.

The mindeset that you have when you tackle this problem makes a huge difference. One “traditional” way of solving this problem is to break the chain up into little pieces, find their tiny contributions to the force, and integrate over all of them. This works just fine, but it isn’t too elegant. Instead, when you think broadly in terms of momentum and energy, the problem turns out to be pretty straightforward.

A flexible rope with a length and total mass hangs vertically just above a scale. The rope is released at time . What is the reading on the scale as a function of time? 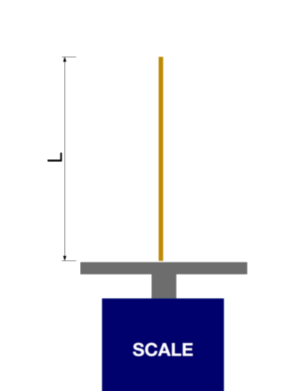 The total force on the entire piece of rope is equal to the force of the scale upwards minus the force of gravity downwards:

Let’s plug the expression for momentum into Newton’s Second Law and turn the crank. We will use dot notation () just to keep the equations clean-looking:

We can solve for the speed of the rope () by considering energy conservation. All of the potential energy of the rope is turning into kinetic energy when the top of the rope falls from its initial height (L) to some height (h). For a section of rope with height and mass :

Then, we can continue simplifying the expression for force:

We have reached an important intermediate step. We now have the force measured by the scale as a function of rope height . Remember, this equation is only valid while the rope is falling. After it comes to rest on the scale, the scale will simply read the weight of the rope ().

We can now solve for the force read by the scale as a function of time. At some time , the top of the rope has fallen an amount (from the kinematics of a falling particle). Thus, the height () of the rope is equal to:

Plugging the height into the expression for force gives: 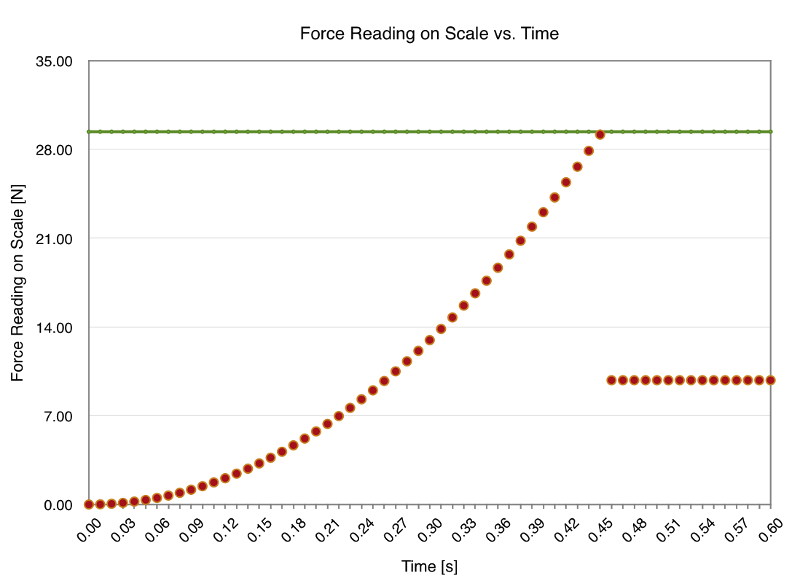 Interestingly, when the last bit of the chain hits the scale, the scale reads rather than just . This is because we have to take the momentum of the falling chain into account as well as its weight.

Dr. Alex Dzierba performed an example of this experiment in his class (see his writeup of the data). Notice that the chain is generally proportional to with a few bumps along the way. The bumps in the graph come from the fact that a real chain is not perfectly uniform.